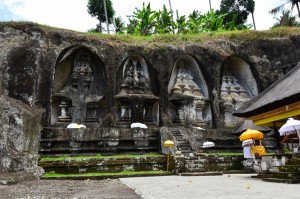 Gunug Kawi is an ancient rocky temple situated in Pakerisan River, near Tampaksiring village – Gianyar Regency in Bali. This archaeological complex is carved out of the living rock, dating back to 11th century. The temple with majesty and richness in history has been proposed by Governor of Bali to be listed on the World Heritage Sites.

The countryside where the complex is located offers beautiful view of lush and footpath down to reach the temple, passing through spectacular rice terraces. The appealing, mystifying, and magnifying natural sceneries from the footpath, which leads from the road down to the temple will be more impressive, with the sound of water trickling along the irrigation channels at the bottom of a valley. The only sound you hear is that produced by farmers who work on their rice fields.

To reach the complex, visitors must walk about 600 meters from the parking lot to the ticket counter then walked down on approximately 315 stone steps. Before taking a cross on the bridge at the bottom of the valley, you can see the first stone monument. Another group of stone monument is carved on the left side of the main temple across the river

The monuments are shaped in relief on a solid rock hill, commonly called “candi”. 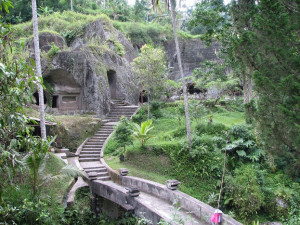 There are shaped like burial towers, telling identity of the royal personages honored here. Those are mostly found all over Central and East Java.

As the sources from any historical books about Bali and related to the information given by the temple’s care taker, Ketut Raharja suggested that Those five ‘candi’ in the main group were built for King Udayana, his Javanese queen Gunapriya, his concubine, his illustrious eldest son Airlangga who ruled over East Java, and his youngest son Anak Wungsu. Reigning over Bali from AD 1050 to 1077, Anak Wungsu is believed to have given up his kingdom to become a religious hermit.

In the right of the main ensemble of temples is a cloister with five cells carved out of rock. The cloister inmates most likely were caretakers of the ‘candi’. There’s a second hermitage near the main cloister, consisting of niches around a central courtyard, which might have served as sleeping quarters for visiting pilgrims. To get into this part of the temple visitors must take off their shoes.

Being in the center area, where “candi” are carved, you might feel that you were reborn back to the past. It is impossible to capture all the surrounding beauty found in this spot on film. And you could easily imagine living here in peaceful and tranquil setting, getting along with the local people who sell craft items along the footpath.