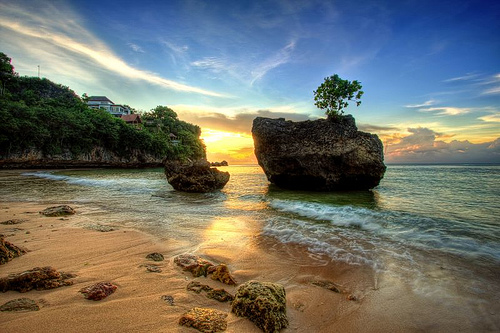 Padang-Padang beach is not inferior to other coastal beaches in Bali such as: Dreamland, Kuta and Nusa Dua. Padang-Padang beach scenery is very beautiful with crystal clear water blue-green, soft white sand and the sound of the waves that break at the beach makes this place perfect for recreation, relaxing, sunbathing and surfing.

This beach has its own uniqueness for tourists who come, surrounded by solid rock cliffs. To reach the tourist sites must go through the slit barrier reef which is only fit one person and one down the stairs together to reach the beach, it makes one thing of interest to tourists who come. In addition to the uniqueness, in this beach visitors can also see the beauty of coral reefs.

Padang-padang beach attract many domestic and foreign tourists. The beach is popular starting around 1996’s from the music group Michael Learns To Rock took this beach as a shooting location in one of their video clips. Padang-padang beach is more famous by the movie ‘Eat, Pray, Love’, starring Hollywood actress, Julia Roberts, who also filmed here.

Padang-Padang beach is also known as “one of the best surf spots in Bali”. Perfect waves for surfers world-class, because the sea base of the rock and can produce a perfect barrel wave. No wonder when the annual event like the Rip Curl Cup Invitational held at Padang-Padang beach every July and August.