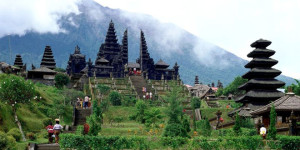 Besakih Temple, Bali, is located in Besakih countryside, Karangasem regency, east part of the island. It is located in the southwest side of mount Agung, the biggest mountain in Bali. Besakih Temple is located in the plateau area which is covered by the cool atmosphere and Mount Agung as a back drop. It is ideally for the people who did the meditation and now Besakih , the Temple is opened for tourist and it is the great place to visit in Bali.

Besakih Temple – The Mother Temple, is a big – actually it´s the biggest – Bali Hindu temple in Bali, which by the Balinese people are called Pura Besakih. Besakih Temple in Bali has a beautiful view from the top of temple area with the wide nature panorama all the way to the ocean. The Besakih temple is very famous and that´s why this temple is visited by thousands of tourists from all over the world – Tourist Attractions Bali Travel Guide most recommended Bali places
The definition of the name Besakih is first of all because the temple is located in the Besakih which means Basuki from the Sanskrit word Wasuki – which refer to the Ancient Java language where Basuki means congratulation.
The Besakih holy temple is temple for the entire Bali island. All the allegiances of the Balinese people come together at Besakih.
The Besakih Temple complex is built pursuant to cosmos balance. It is based on the nature conception which is disseminating the fundamental temple complex that is arranged to pursuant of the way direction. So, this building can deputize nature as symbolic of the world balance existence.
The Besakih temple is a cluster of a hugh amount of temples: 80 temples. Besakih was most likely some sort of monastery started in the 8.th century – believed to to be in honour for the god of Gunung Agung (which is why the mountain is named Mt Agung). Over the next thousand year period the temple continuous expanded – but most of temples were made in the period from the 14th to 18th century. The Gelgel-Klungkung dynasty made in the 15th century several smaller temples in honour of the gods – those temples are now a part for the Besakih temple and have a function as head-temple for the regions and districts. Inside Besakih is the all-important Pura Penstaran Agung with its towered Meru.
Besakih Temple is located in the plateau – covered by the cool atmosphere and Mount Agung. This Bali place was ideally for the people who did the meditation. Besakih temple is now opened for tourist and it is the great place to visit in Bali.