Kerta Gosa is a beautiful historical site situated in the hearth of Semarapura Town, about 40 km east side of Denpasar City. The name of Kerta Gosa is taken from Sanskrit where Kerta means serene and meanwhile Gosa word is derive from Gosita that mean established or announced. Thus the meaning of Kerta Gosa is a kind of Bale building where the king announces Judicial Legislation, justice, punishment and so on. Beside of Kerta Gosa, there is a building called by Taman Gili which is located adjacent to Bale Kembang that is a traditional building floating in the center of fish pond.

Kerta Gosa and Taman Gili Building can not be separated with the establishment of Semara Pura Palace. The Semara Pura Palace is established by I Dewa Agung Djambe, the first king of Klungkung around 1686. The painting that decorate Kerta Gosa ceiling are the painting with the story motif like Ni Diah Tantri, Bima Swarga, Garuda and Palelindon those are arranged in form of panels with 9 levels. The paintings are begun from the east panel with the story in the direction of circumambulation (turning to the right as clockwise) and finish at the north panel.

Kerta Gosa is founded in 18 century and it has a lot of changed in 20 century. These building have been renovated after earthquake that brought much destroy in year 1971. The most unique of this building is the ceiling made from the asbestos material fully decorated by the traditional painting with Kamasan style famous in 1930. Thirty years later in 1960, Pan Semaris Putra from Pan Seken has restored and renewed according to the original style. 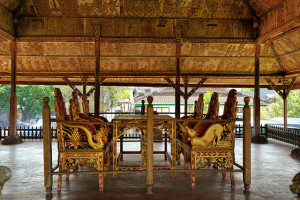 During the Dutch colonization (1908 – 1942), Kerta Gosa is still used as a court to persecute the violators especially criminal. In line with the colonial administration, the Indonesian Law has changed from the legal system Majapahit heritage (Traditional) into the continental law system which is brought by the Dutch. The changes of the system are not means to retaliation, but improve the perpetrator to be accepted back into their society. By this concept, the word of Penjara (Jail) has changed into Lembaga Pemasyarakatan (LP).

The ceiling of Taman Gili Building that is fully decorated by the traditional painting to persuade the violators to not repeat the offense (recidivism) because the Hindu society in Bali have heard the story of Bima Swarga that has been visualized on this building. Realized and believed, beside of the prison sentence they got, it has been waiting for the punishment of the hereafter is more terrible and feared in form of fire prosecution by Cikabakala. Hopefully, after the seeing these visuals, the violators realize against the crime resulted in suffering, hence it can prevent the recidivism.

a, one of princes from Panca Pandawa, when searching the spirit of his father in the afterlife is saying tortures. Many events have been seen at one given the answer to all the questions why the soul or spirit were there and tortured.
Another building is Bale Kambang (Floating Bale). It is so called because it looks as floating on the water pond where inside of pond growth the lotus flowers. This Bale Kambang has survived from the damage cause by the Puputan war in 1908, but the current building is the result of the improvement and expansion done in 1942. Its function is as a place to welcome the VIP Guest by Dewa Agung King. The paintings decorate the ceiling can be divided into three levels includes:

There is a Semarajaya Museum located on the right side of the Kori Agung courtyard. This museum has been opened at the former of MULO School building (intermediate school level in Dutch colonization era) and also formerly used by SMP 1 Klungkung (Junior High School no 1 Klungkung. The museum was inaugurated on 28 April 1992 by Ministry of Home Affairs. The physical form is blend the ancient Dutch style and Balinese traditional architectures.  We can discover the ancient objects (pre-history), historical objects included the photographs documentation from the descendants of Klungkung King and craft objects that contain the typical history of Klungkung.

In front of Kerta Gosa complex, exactly across the street, it was stand a stately monument made by black stone in form of Lingga Yoniwith a high of 28 meters and built on 123 meter square land. It is a Puputan Klungkung Monument and inaugurated on 28 April 1992. This monument is a memorial of an historical event on 28 April 1908 where in this monument was Puputan or all out war of the people under the leadership of Klungkung King against the Dutch soldiers. The war is begun because of Klungkung King forbidden to worship at the temple. This is an evident of persistent resistant against Dutch colonial effort to dig its claw into imperialism in Bali. The Klungkung people love freedom, great respect and uphold the majesty and holiness of those who had fallen in battle bloody cause of bullets from Dutch.  In the memorial room is equipped with a diorama which depicts the struggle of Klungkung people with their king.