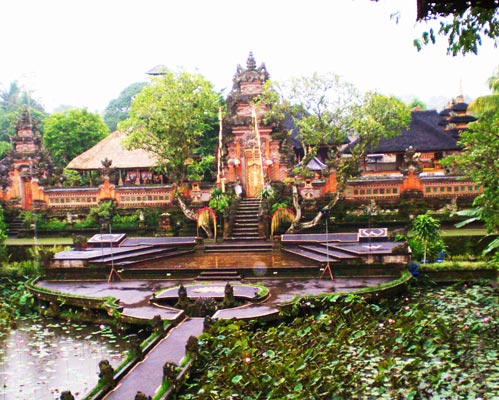 Puri Saren Ubud (Ubud Royal Palace) is an Ubud Kingdom Palace with beautiful Balinese traditional houses as a residence of Ubud King. It is set in the center of Ubud Bali with traditional art market just in front of it and it is found by Ida Tjokorda Putu Kandel who has commanded from year 1800 – 1823. Ubud Royal Palace is an artistic cultural life center, while the traditional market is the symbol of local economics resident. The existence of Ubud Royal Palace as a palace is equipped by a Wantilan/auditorium that is a large building of meeting room and a banyan tree as shelter place at the daytime. The traditional market is the place of society economics and its existence is always border on palace as artistic cultural life center. It means that the both pole meeting is describing the dynamics of society and kingdom life.

The history of Bali’s royal ruling families goes as far back as the 10th century but it wasn’t until the 1300’s that they became historically renown. In 1343, the Majapahit Empire took hold after the Javanese king defeated the Balinese king. Their rule marked the arrival of Javanese Hindu culture, which is still evident today in architecture, the arts, literature, dance and the theatre.
A few Balinese villages remained aloof from this change, however, with the rise of Islam across Indonesia, the Majapahit Empire finally fell and Bali became independent at the end of the 15th century. Many of the Javanese aristocracy and key members of the creative society took refuge on the island and the period became known as Bali’s Golden Age.

Ubud has been a “royal town” for over a hundred years. Its princes, who bear the title “Tjokorda” or “Agung” still live in traditional palaces, called “Puris”. Be aware, however, that every place called “puri” is not a royal palace. The word has been used quite liberally of late. Also be aware that there is not one palace in Ubud, but many, most of them clustered around the main cross-roads near the Bud market. There are several other “royal” towns in the Bud area, too, with their own palaces, most of which have close family ties to the Bud Tjokordas. A web of connections is maintained by incidental and arranged marriages among the respective offspring of princes in Sayan, Pejeng, Singapadu, Peliatan, and Payangan’s puris.

Although the old Balinese feudal system was superseded by the Dutch colonial government more that eighty years ago, the Tjokordas still retain a special role in Ubud society. Many leadership roles, both sacred and secular are held by Tjokordas. They also figure prominently in the local business community, arts institutions, and professional circles. While no formal power is automatically granted to someone because they come from a puri, the Ubud royals still command respect solely on the basis of their heredity. They also command respect from some quarters on the basis of their rather disproportionate wealth.

The Royal palaces have long been the largest landholders in the area. They used to manifest this role in a largely “custodial” way, managing vast tracts of rice-growing land for the benefit of the community and the temples. In recent times, however, with the advent of western models of land ownership, many palaces have developed or sold landholdings to augment their personal wealth–sometimes conspicuously. In pre-colonial Bali, palaces were the primary patrons of art, music, dance and literature. The Ubud palaces consciously continue this tradition. They act as repositories of traditional culture, and develop artistic endeavours throughout the area, much to the benefit of both Ubudians and visitors.

The Tjokordas are no longer the physical embodiment of The State, they are just private citizens, with the same concerns as other private citizens, plus a few more. Accordingly, the Ubud palaces are essentially just family homes, and none have yet been turned into museums of public tourist attractions. While some of them are fine examples of traditional architecture, none are “historical” in terms of age. In fact, most are pretty new. The oldest Ubud palace was located a little to the east of Pura Dalem Ubud, above the main road. It collapsed in an earthquake early this century, and nothing remains but a flat place with traces of foundation here and there.