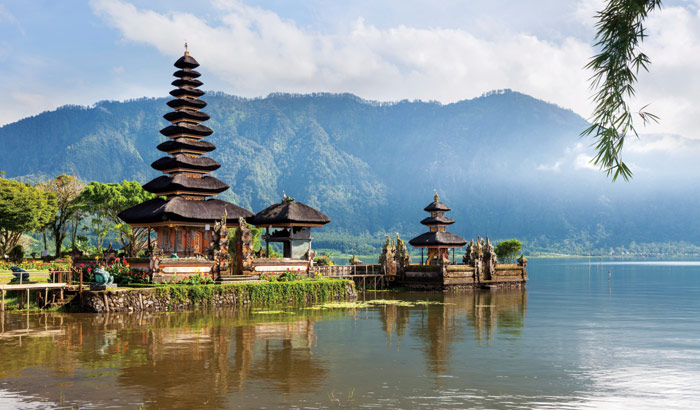 Ulun Danu Beratan Temple is a beautiful Hindu Temple Uniquely set on the water lake surrounded by beautiful scenery of Beratan lake and green hill. It is located at Candi Kuning village Baturiti district and Tabanan regency which is about 50 km from Denpasar City to the north site following the main road from Denpasar to Singaraja. The other part of temples are at the edge of  Beratan Lake, where in the north we can see Puncak Sangkur Mount,  at the east site there is  Beratan mount which is commonly called by Puncak Mangu. At the south we can see Teratai Bang Mount meanwhile in the west is Tapak Mount and Batukaru Mount.

Based on the data of Mengwi chronicle was implicitly out line that I Gusti Agung Putu as the founder of the Mengwi Kingdom builds the temple on the edge of Beratan Lake, before he established Taman Ayun Temple. On this Lontar (bible made from papyrus leave) is not mentioned when he was found the Ulun Danu Beratan Temple, but on the Lontar was fond the Taman Ayun Temple establishment with the ceremony held on Anggara Kliwon Madangsia ( Tuesday, Balinese calendar ) Saka year 1556 ( 1634 AD) .

This temple is strategically located in the hearth of Bedugul, one of the famous tourist destinations in Bali Island. It is set on the beautiful lake of Beratan and just beside of the main road from Denpasar to Singaraja town. The temple is located in the plateau area covered by the cool temperatures and blessed by the panoramic view that makes it very famous among the tourists and very exotic to visit during your vacation in Bali.